Kodály, the Educator and Humanist 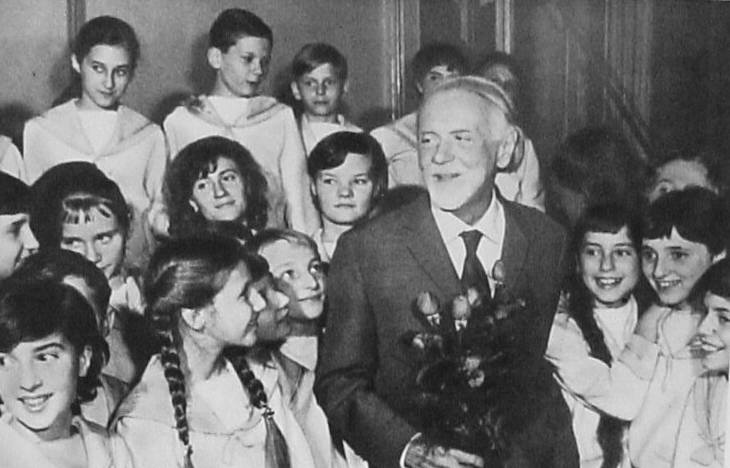 Zoltán Kodály (1882-1967), prominent Hungarian composer and musician, directed a significant portion of his creative endeavors to the musical education of the Hungarian nation-an interest which developed over many years. Such efforts were initiated with the folk song collection beginning in 1905. As he became aware of the great need to improve the quality of singing and music training of teachers and children alike, he began composing for children’s choruses in the 1920’s and required his composition students to do the same. Folk music provided inspiration, as well as the musical basis, for many of the compositions. By 1929 he was determined to reform the teaching of music and to make it an integral part of the education of every child.
In a lecture on children’s choirs in 1929, he said,

“Teach music and singing at school in such a way that it is not a torture, but a joy for the pupil; instill a thirst for finer music in him, a thirst which will last for a lifetime If the child is not filled at least once by the life giving stream of music during the most susceptible period-between his sixth and sixteenth years-it will hardly be of any use to him later on. Often a single experience will open the young soul to music for a whole lifetime. This experience cannot be left to chance, it is the duty of the school to provide it.” (Selected Writings, p. 120)

Kodály believed that music is meant to develop one’s entire being-personality, intellect and emotions. He said, “music is a spiritual food for everybody. So I studied how to make more people accessible to good music.” (Kodály, 1966) Kodály realized this was part of everyone’s basic heritage and was necessary for human development and should be started at as early an age as possible. Jenö Ádám, an early and prominent colleague of Kodály, stated, “The most important thing is to actualize the instinctive love of the child for singing and playing, to realize the changing of his moods through the songs, his feelings, his experiences – in other words, to bring about the miracle of music”.

To learn more about Zoltán Kodály:
Who Was Kodály?
Edited by Alan Strong 1993. Seven Articles previously published in the Kodály ENVOY. 64 pages.
$7.00 Members | $10 Public
WHO WAS KODÁLY? is a collection of seven articles of tremendous historical significance about Zoltán Kodály, the man behind the Kodály concept. These articles represent the Kodály Envoy: 1982 to 1992 written by former Envoy editors, Kodály’s 2nd wife, a noted Hungarian ethnomusicologist, an American elementary music teacher, and an American Ph.D.
Click here to purchase this book